Dwarf Fortress is a single-player fantasy game by Bay 12 Games. You can control a dwarven outpost or an adventurer in a randomly generated, persistent world.

Dwarf Fortress is completely free. The developer does appreciate donations. He states: "As of June 2007, donations are the only money I receive from month to month and are therefore deeply appreciated!" 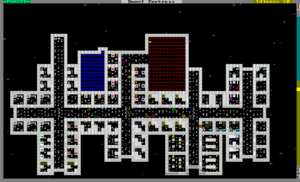 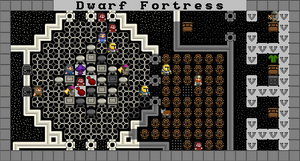 The game has a very steep learning curve, partly due to its CP437 graphics (code page 437, the character set of the original IBM PC), but also due to the fact that it is one of the most complex games ever released. That said, the curve can be overcome with time, documentation from this wiki, help from people on the forums, and plenty of Beer.

Graphics sets are available which make the graphics more intuitive.

and a third non-game mode:

An important part of Dwarf Fortress is that it creates a randomly generated, persistent world for you to play in. (The world is only "on" when you are actually playing in it, however.) When you die in either the adventure or fortress modes, your next game will be in the same world, albeit a few days later. You can visit your old fortress, or get revenge on the monster that killed your adventurer. If your fortress or your adventurer had done anything of particular note, there's a chance that the game will generate a legend for them, which you can read about in the legends section.

The first alpha version of Dwarf Fortress was released on the 8th of August 2006, after nearly 4 years of development (which began in October of 2002). Note that while Dwarf Fortress is technically still in the alpha stage of development, it is fully playable, and definitely enjoyable.

There are some historical milestone versions of DF which you might hear of and wonder about:

How do I get more help?