A medium-sized monkey found in woods and grassland. It usually lives on roots and insects but can become a pest in civilized areas, roaming in large groups and begging for scraps.

Rhesus macaques are small creatures found in many temperate biomes, spawning in loose groups of 5 to 10 individuals with the intent to steal your fortress - they are not cute little chimps that wear tiny tuxedos and dance to calypso music. They are larger, meaner, and considerably more likely to leave teeth marks in the neck of any working dwarf foolish enough to get in their way. If they exist on a map, they will be trouble at one point or another. They are known for stealing pretty much everything, including food, items, weapons, armor, and artifacts. All rhesus macaques are born with Legendary skill in climbing.

Fortunately, they can be dispatched without too much trouble due to their small size, and will often flee when faced with even the most ludicrously under-powered militia. War dogs will also usually make quick work of them, though it is generally recommended to take all important items underground as soon as possible when embarking in a macaque-inhabited area, as a group of them can quickly swarm an undefended wagon. They are essentially flightless kea and should be treated accordingly.

Rhesus macaques can be captured in cage traps and trained into low-value pets. While they can be bred to supplement a meat industry, they are small and give few products when butchered. They also take 3 years to reach adulthood, much more than more accessible sources of food, which may be more than the player is willing to wait. 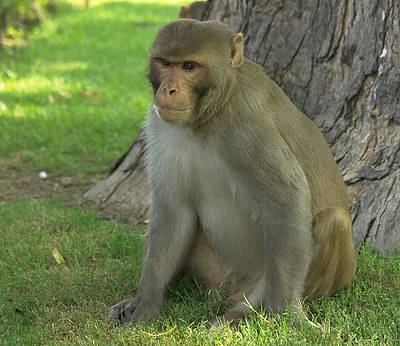 Admired for its mischief.

It has been suggested by some that diced Rhesus Macaque meat cooked with dwarven syrup is used for a tasty dwarven candy, or Rhesus Pieces. [1]