A man-like creature with the tail of a fish instead of legs.

Merpeople are fanciful creatures that can be found in good-aligned oceans. They can be seen swimming in pods of three to six individuals. They are somewhat larger than dwarves, but are also benign and will avoid confrontations should a dwarf accidentally fall into their ocean. Male merpeople are known as mermen, while females are known as mermaids.

Merpeople are intelligent, can speak and have the ability to equip items, but they do not produce their own equipment. Being learning creatures, they cannot be trained or butchered. Merpeople can only survive in water - if removed from it, they will air-drown. 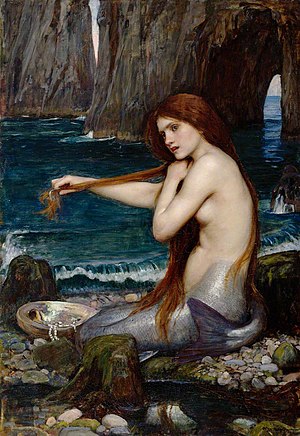 Admired for their tails.

Merperson parts are no more valuable than those of domestic animals. This is a moot point, however, as merpeople are intelligent enough that dwarves refuse to butcher them, making merperson genocide in the name of profit absolutely useless; although, nothing is stopping you from committing merperson genocide just for the fun of it.